Naples Poet Encourages Others to Persue Their Passions 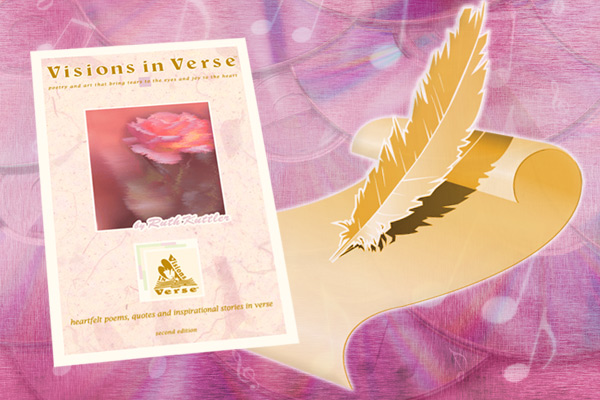 Dressed in her nightgown, Ruth Kuttler would stay up in the obtuse hours of the night working on her poetry in the kitchen. After she was laid off from an unfulfilling nursing job in 1998, Kuttler saw an ad for a poetry contest while looking through the classifieds. She didn’t even like poetry — most of it was obscure and inaccessible. But she thought writing might help her figure out what to do next, career-wise.

One night, as she worked on her entry, her husband, Paul, walked in to her creative space and told her she should go to bed. That’s when she announced her plan: to become a poet and a writer. What Paul thought was just a phase morphed into a book, called “Visions in Verse” (2005). The book is filled with inspirational quotes and simple rhyming lines, like you would see in a Hallmark card or an old-fashioned needlepoint sampler. “For about three weeks I didn’t stop writing,” Kuttler, a 54-year-old Naples resident, says of her first attempt at poetry. “It just kept pouring out of me. It was a gift and a passion I didn’t even know I had.”  The layoff allowed her to pursue that passion, but she doubted herself many times before she succeeded. Her talk on Nov. 28 will be geared toward those who have come up against a wall and are looking for new beginnings.

As a nurse practitioner, Kuttler says she was wasting her energy running aimless circles “like a gerbil in a cage.” It was never the career for her. In her junior year of nursing school, Kutter stepped into a hospital for the first time. She hated it, but her parents told her to continue. A strong believer in homeopathic medicine and natural cures, she says she felt almost guilty when she saw patients prescribed modern treatments by their doctor. “I would go home feeling physically and emotionally drained out of integrity,” Kuttler says. Leaving nursing meant forfeiting financial stability. But she had to move on, she says. “I felt like if I took another (nursing) job, I would sabotage myself,” Kuttler says. Money was a challenge. To support her family, she co-founded a graphic design and marketing company. She and Paul invested in real estate. “That’s how we were able to get out from under,” Kuttler says.

Kuttler would read her poetry to every person who would listen. Those who started out skeptical — “Ugh, poetry?” —would soon be in tears, Kuttler said. Many people told her that her poems described their feelings or situation exactly. That was the sort of encouragement that Kuttler needed to hear to keep on writing. Not all the reaction have been positive. To her surprise, the teacher of a writing class she took said that because her poetry wasn’t in iambic pentameter — or anything equally sophisticated — it wasn’t any good. Still, a group of classmates would regularly surround her as she read her latest work to them aloud. She says she would like to see a new movement in poetry, where simple, straightforward and sentimental styles are more accepted. “Poetry for the people,” she calls it.

“Poetry is an extremely empowering vehicle,” Kuttler says. “Through poetry, we could achieve world peace. It reminds us that all people have the same basic desires in life.” Each of Kuttler’s poems tells a story, some of which come from true experiences.

One poem, called “The Box,” is based on a sermon she heard in church. A young girl grows up with her tough-minded grandfather, who is her only living relative. She makes him a present — but when he opens the box, it’s empty. Angry at the mess she made for no apparent reason, the normally bouyant girl looks deflated. She blew dozens of kisses for him into the box, she explains. “Sometimes it takes a child to shake us up and (help us) realize what’s important,” Kuttler says.

When an entrepreneur comes to her marketing design company with an idea, Kuttler says she tries to use the same sense of inspiration and encouragement that comes out in her writing — even if she decides she can’t work with them. Sometimes, she will even read them one of her poems.

Being a support system for her clients is the most fulfilling thing about her new career. She says she has needed support through the changes she has made in her life. Now, she can do the same for others.

Kuttler is working on a self-help book, “Core of Passion: Five Keys to Living a Joyful, Fulfilling Life.”  The fourth idea— embracing adversity — is what brought her where she is now. “If I hadn’t been laid off, or if I had given up, I would never have discovered what lights my fire,” she says. “The prize is not the paycheck but the person you become.”