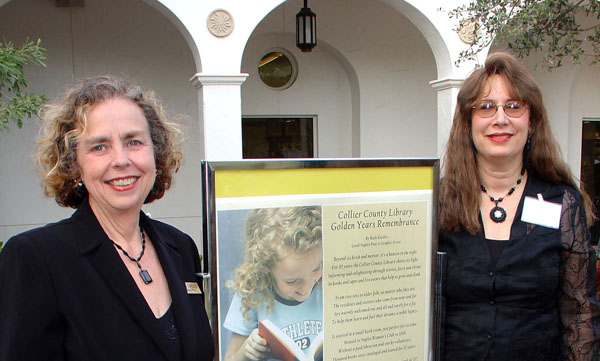 North Naples poet Ruth Kuttler inspires the least likely suspects — everyday, ordinary people — with empowering messages derived straight from the writer’s experiences of shelving her 25-year profession in healthcare and launching into a new career of Web site design, graphic design, and poetry. Her poems, she said, are not like traditional poetry to be acclaimed for its cunningly clever interpretations and style. Much like rap artists, song lyricists, and greeting card writers, Kuttler’s messages will stand out to readers and listeners instantly.

“While the thoughts and feelings they evoke are often profound, all my poems are easily understood and don’t leave people wondering what I’m talking about,” Kuttler said.

The 54-year-old poet, who recently published a revised edition of her first book, “Visions in Verse,” will be returning for the fourth consecutive year to the main library in Naples on Tuesday, Nov. 28, from 6:30 to 7:30 p.m., where her work will be on display for the next month. After 25 years as a nurse practitioner, Kuttler was laid off. Unhappy with her profession, Kuttler said she went through a period of despair, wondering what she was meant to do. She sat down with a pen one day, hoping to write one poem, and instead wrote consistently for the next couple of weeks. “I didn’t put a pen down,” Kuttler said.

The poetry writing helped Kuttler discover a part of herself that she didn’t know existed, she says. “Most people aren’t aware of greatness inside of them,” Kuttler adds. Her poetry isn’t nearly as important as the message she spreads by sharing it, the poet believes.  She feels a big part of her work is showing other people that it is okay to take risks.

“Sharing how I let go of fear — fear of failure; fear of rejection; fear of losing security,” Kuttler said. “I gave that all up to start my life over again. I went back to school, started my own business, which today is very successful … the poetry helped me turn it around.”

Neapolitan Jeff Welle, 42, came to Kuttler professionally, hoping to turn an idea into reality. Her poetry, he said, gave him the confidence he needed to succeed. “Her poems come from the heart. They’re life experiences. You can read them and understand why she is so wise,” Welle said.

Welle, who was a paramedic, firefighter and registered nurse, in New Jersey and New Mexico, was injured on the job 18 years ago, causing bi-lateral hip replacements that left him disabled. Only knowing the fire industry field, Welle, not sure what to do with his life, came up with a simplified approach for pump operations for the fire industry that he always used himself on the job. After working with Kuttler, his newly produced manual was reviewed and given the thumbs up by the International Fire Service Training Association, and put in a national publication.

“She guides me through both professional and personal issues. She gently steers me through turbulent waters and believes in me. She sees more in me than I see in myself,” Welle said.

Kuttler admits she had her own guardian angel when she began writing poetry. Jeannette Boucher, of Naples, who she met at Toastmasters, a nonprofit organization that develops public speaking and leadership skills. “(Jeannette) saw more in me,” Kuttler said.

According to Boucher, when she met Kuttler the beginning poet had a dream and made a decision to make it happen. “I guess that’s where I came in. I was one of her supportive friends,” Boucher said. “Ruth isn’t scared.  She wasn’t, and isn’t now.”

To meet and listen to Ruth Kuttler, visit the Collier County Public Library at 2385 Orange Blossom Drive, off Airport Pulling Road North, on Nov. 28 at 6:30 p.m. For more information, call the library at 593-0334, or visit Kuttler’s Web site, www.visionsinverse.com.

“The fairer sex is what she’s called, A struggle to begin.
For in a world where man is king, it’s difficult to win.
But tenderness and nurturing are not to be misread.
A strength and power to rule the world lie in her pretty head.

And even in the darkest night, the moon will light her way.
No rainbow comes without the storm and peace may come with wars.
And in her heart she knows she’ll win if she keeps opening doors.”